Glencoe appears in the opening credits of every Outlander episode. With stunning mountainous scenery, it provides a perfect example of the rugged beauty of the Scottish highlands.

Glencoe has a dark and bloody history. Many will have heard of the massacre of Glencoe, the infamous government-sanctioned killing of members of the MacDonald clan by the British Army, 0n 13 February 1692.

Having defeated the Jacobite uprising of 1689-90, the British Government had to police the Scottish highlands. This wasn’t easy. As well as having their own culture and rules, the clans were naturally distrusting of the Army. As a result many clans were regarded as outright lawless. One of the most lawless clans was the Glencoe MacDonald clan. 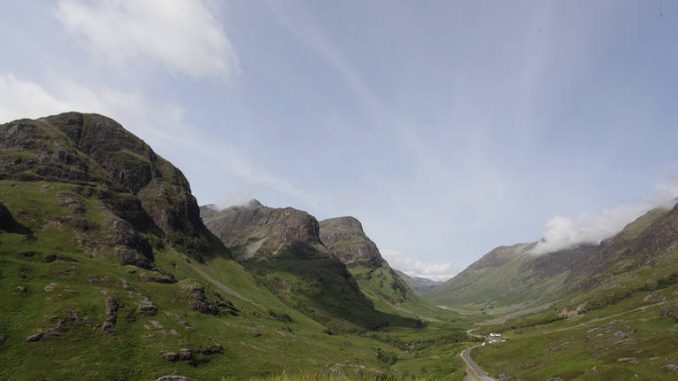 Looking to divert soldiers to the war in central Europe, the British were keen to put and end to this highland lawlessness. An example had to be made. It was decided that all the clans had to pledge allegiance to the King. A deadline of 1 January 1692 was given. Although reluctant, the clans agreed. However, the MacDonalds failed to meet this deadline, giving the army the perfect opportunity to make an example of them.

Over 900 men were sent to kill the clans folk. 120 men from the Earl of Argyll’s Regiment of Foot were billeted to the area ahead of the lethal orders. 400 soldiers were sent to guard the southern exits. And a further 400 were ordered to stop anyone escaping northwards. The result was that the settlement was completely destroyed and all buildings burned to the ground. However, the massacre was nowhere near as bloody as it could have been. An often quoted figure for deaths is 30, with other numbers ranging from 25 to 38. The belief is that many of the billeted soldiers gave warnings of what was coming, allowing the clan to send children and others away before the killing started.