Pollok Country Park is a large public park located on the south side of Glasgow, Scotland. It is well known for a number of reasons including being home to the police mounted and dog-handling divisions as well as having the world famous Burrell Collection (museum) and the much-loved 18th century Pollok House. It also has many wide open spaces that are ideal for filming outdoor scenes for Outlander.

Pollok Park has been used several times by Outlander. At the time of writing (pre-season 5) we are aware of it having been used for seasons 1, 2 and 4. Being a large park with varying scenery, we would not discount the possibility of it being used in future episodes.

The park was first used to portray the surroundings of Castle Leoch. The gardens around Pollok House were used as those next to Castle Leoch, where Claire gathers medicinal herbs. Image source : nts.org.uk 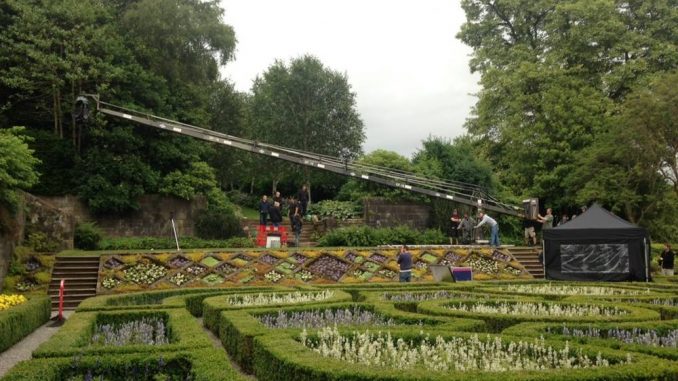 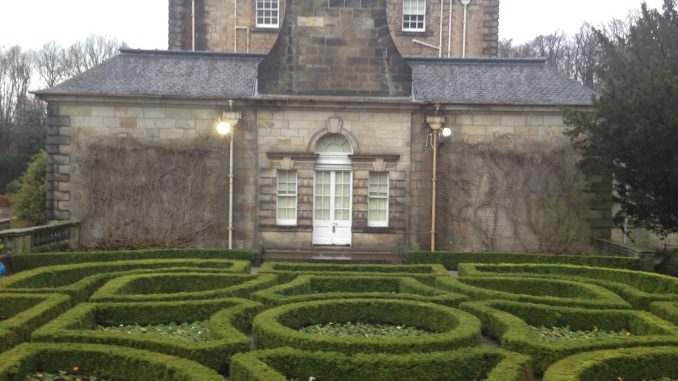 Later, in season 2 it doubled for a number scenes set in the French countryside. These included the duel between Jamie and ‘Black Jack’ and when Murtagh holds up the Comte’s wine shipment in the forest. 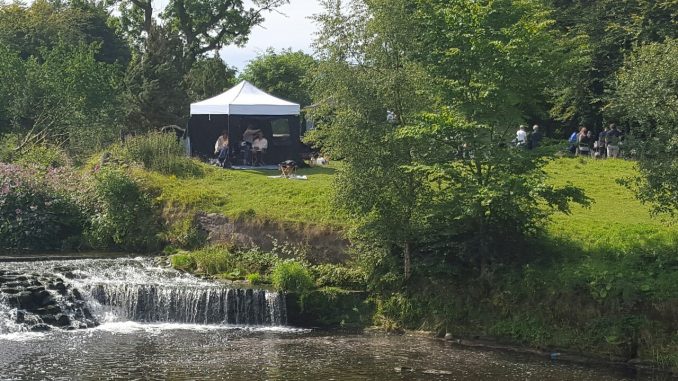 Above we see a photo of the actors preparing for the infamous duel scene. It took us some time to locate the exact spot. However, if you look at the image of the bridge later in this page, you can see the same waterfall. This indicates that the duel scenes were filmed across the stream from the stable buildings.
Image source : fenchurchly @ ontd-sassenach.livejournal.com 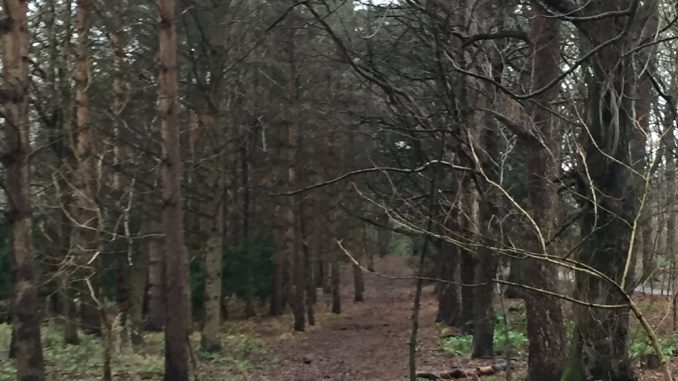 We came across this forest path by accident. We immediately recognised it as having been used in more than one scene. It looks, to us, like the forested area that Jamie and Fergus ride through in “Best Laid Schemes”. It was, we suspect, reused for the scene where Murtagh ambushes the Comte, relieving him of his wine shipment. 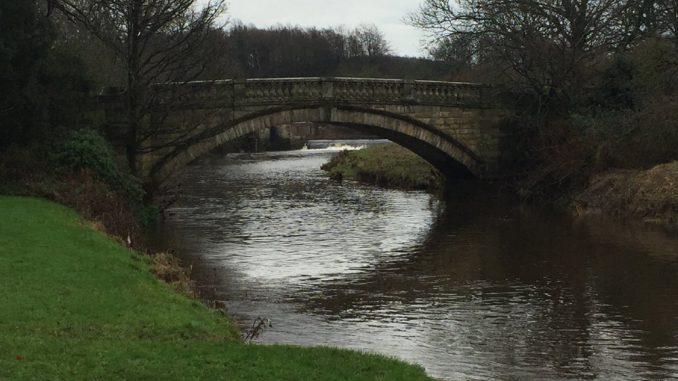 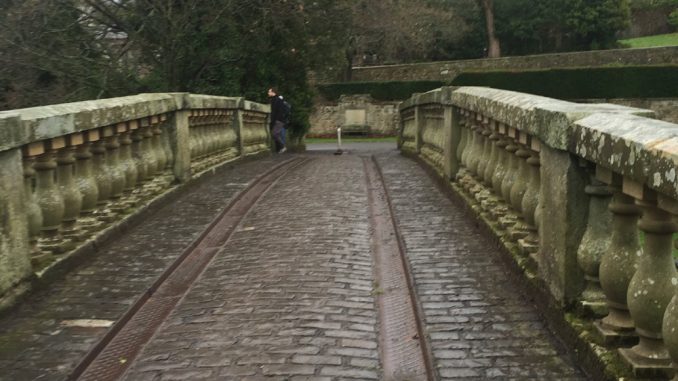 This bridge and the field with the stables in the background will be familiar to those who have watched “Best Laid Schemes”. Jamie and Fergus ride across these on their way to L’Havre to give the Comte St Germain’s men fake smallpox. 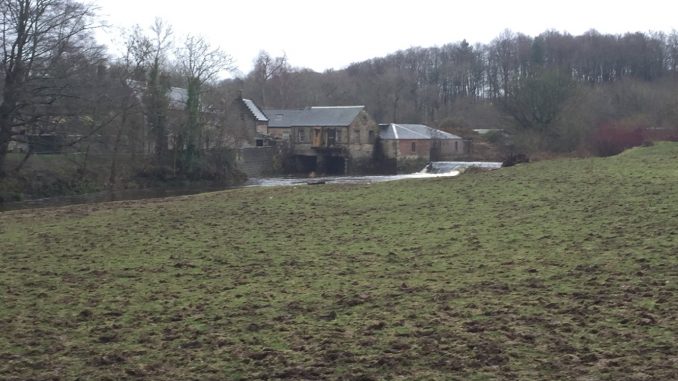 Most recently, one of the park’s fields appeared in Outlander season 4 as the site of the Carolina Scottish Festival attended by Roger and Bree. 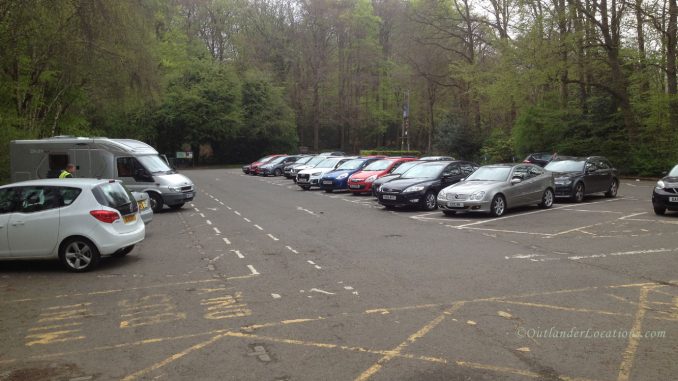 This car park doesn’t appear in any Outlander episodes. However, during filming of “The False Bride” it was full of American cars from the sixties. For visitors’ reference, it lies between Pollok House and the field used for this episode. We’ve provided a photo’ of the road leading from the car park into the the field used for the Scottish festival. 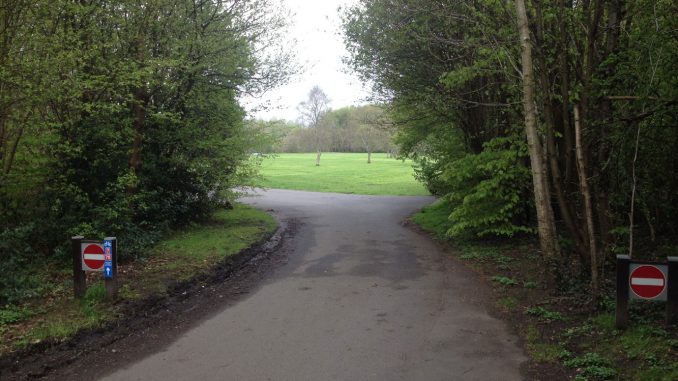 One of our friends, and fellow Outlander fan, Andree Poppleton took the photograph shown below. It shows the Scottish Festival set, almost finished and ready for filming. 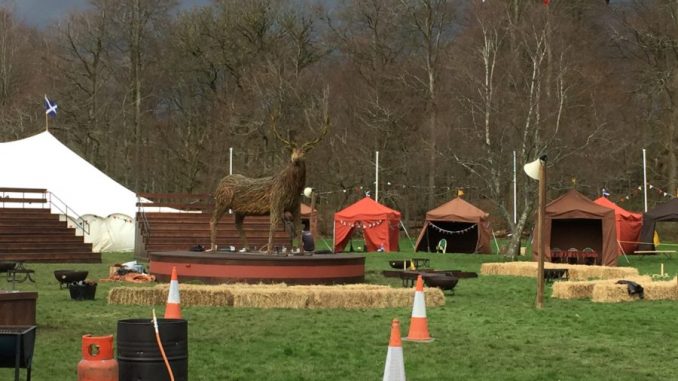 We weren’t able to visit during filming. However, we were in town a week later saw the field used for the Scottish festival scenes. The Outlander team had done a great job of returning the field to its original state. However, we could still see some impressions in the turf, where cars had been parked and buildings set up. 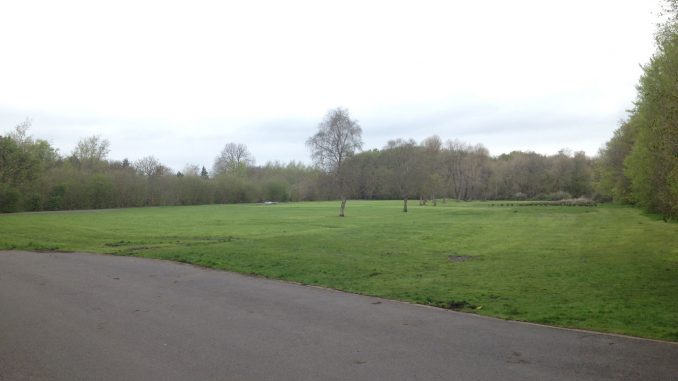 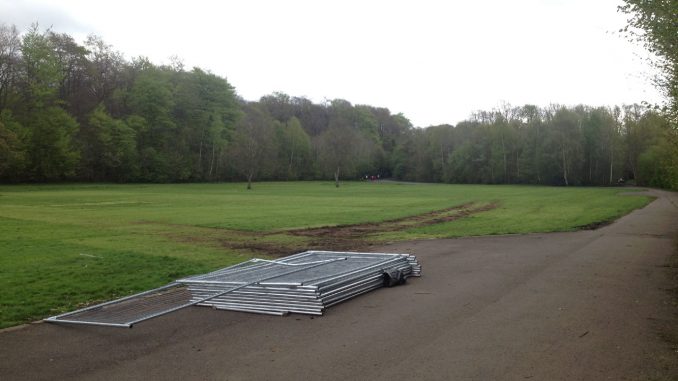 Below is a rough (very rough) map of Outlander filming locations in Pollok Park. Although being from Glasgow ourselves we had 1 or 2 difficulties finding these places. Hopefully, this will save you some time when visiting and following in the the footpaths of Jamie, Claire, Murtagh, Fergus, Bree, Roger and the Comte. And Black Jack.

NOTE : We currently suspect that another location needs  to be added to this page. We hope to confirm this soon. 🙂

Car : Located centrally in Glasgow, and close to major roads, the park can be reached by car without difficulty. Also, on arrival, there is ample parking for visitors. There are two car parks. One (perhaps the most convenient) is located next to Pollok House (see above). The other, larger car park, is next to the Burrell Museum, which is a 20 minute walk from Pollok House.
By train : There are several train stations close to the park. The three most convenient include Shawlands (our favourite), Pollokshaws West and Crossmyloof. Although all are within reasonable walking distance (20 – 30 minutes walking) of the park, we would not recommend this option to those travelling with children.