A report by the Scotsman has pointed to a study showing that tourist attractions in Scotland are outperforming the rest of the UK. Visits to many museums, castles and other landmarks are showing significant increases. For the UK visits are up 7.2%. Scotland has however stood out, with an increase of 15.6%.  And Outlander filming locations have been doing their part to produce these numbers. 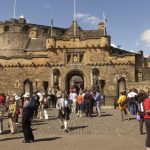 Visitor number are up throughout Scotland. Unsurprisingly, Edinburgh’s attractions performed well. Three of it’s most visited sites, Edinburgh Castle, the National Museum of Scotland and Scottish National Gallery were listed in the UK top 20, and saw double digit increases. However the good news was not limited to the capital city. Outside of Edinburgh tourists have been flocking to well known sites in increasing number. This includes locations known to Outlander fans, such as Doune Castle and Blackness Castle.

This isn’t a suprise to many of us. And with many fantastic locations used in Outlander season 2, we’re sure to see places like Drummond Castle, Dean Castle and Callendar House adding to visitor numbers.