Sam Heughan doesn’t seem to stop. Having only just attended the BAFTAs on Sunday, with co-star Catriona Balfe, today he was being interviewed on daytime TV show This Morning. Similar to Catriona Balfe’s recent appearance on the ITV show, Sam was promoting Outlander, which is shown in the UK on Amazon Prime and More4. 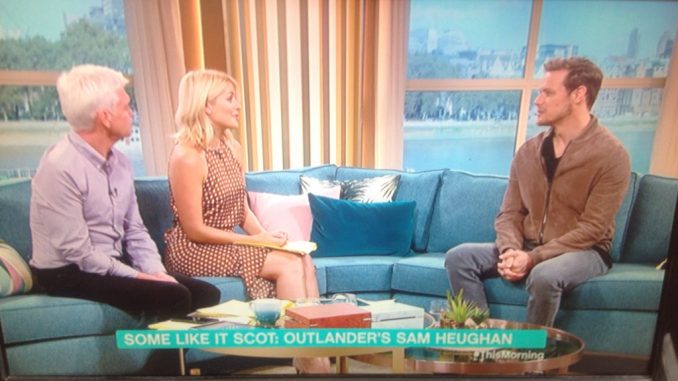 The Outlander star has plenty going on. As well as filming our favourite time-travel / historical drama, Sam has his second marathon of the month coming up, in Edinburgh, in less than two weeks time. On top of promoting fitness community My Peak Challenge and the charity Cahonas Scotland (which aims to reduce the incidence of testicular cancer), we now hear that Sam is producing his own whisky. And let’s not forget his new movie, The Spy Who Dumped Me, that is about to be released. How he manages to fit all this into his busy schedule is anyone’s guess.