Sony TV, who make Outlander for Starz, are in talks to arrange filming of season 5 of Outander. Chris Parnell, Sony TV’s co-president of programming, has been reported by EW as looking to make production a regular, annual, process without lengthy periods of no Outlander. He added “I can tell you there are early talks on us doing that, to absolutely not have an extended Droughtlander like we’ve had before. That’s the goal.” 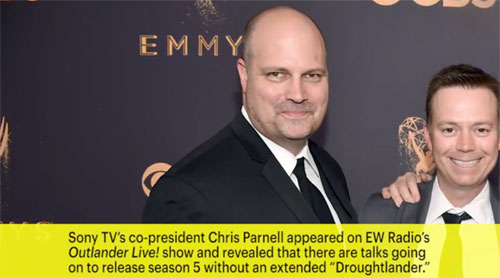 Further comment from Parnell indicates that he is keen to adapt all of the Outlander novels. He said “I’ll tell you that I’m in this to tell Diana’s story to completion,”. “We want to deliver Outlander all the way through, just like Diana wants to deliver it all the way through. Where she leads it, we want to bring it there. I believe in my heart that our friends at Starz want to do the same thing. The worst thing that can happen is if we ended this prematurely.”

It’s not agreed, but it all looks promising for more and more Outlander! 🙂