We recently heard from Outlander at NYCC. With just over a week having passed, allowing us all to digest what was said, we thought we’d have a quick look back at what we think was one of the best Outlander panels so far.

The New York Comic Con saw five of our favourite Outlander stars, Caitriona, Sam, Maria, Duncan and David on stage with Ron Moore, Maril Davis and Diana Gabaldon. One big disappointment was that Adso couldn’t make it. Instead, he was busy overseeing Richard Rankin and Sophie Skelton doing a Q and A section back in Scotland. Apart from Sophie’s obvious discomfort with the climate, we reckon he did a great job keeping them in line.

Before hearing from the panel we got to see a trailer for the coming season. It looked pretty amazing! Presumably, it was ‘heavy’ with scenes from the first half of season 5 (those which have been passed by the editors), but it seems that’s there’s much to look forward to. One take away however was that there seems to be much talk about travelling back (to the 20 century). This raises a few questions about where the story is going, but I expect we’ll just have to wait and see where it all leads.

On stage there was much talk about the expected subjects. Asked about new characters, there seems quite a lot of excitement with the addition of Adso. Sam and co. definitely have some competition.

As ever they were asked about how the characters will grow their and relationships develop. Apart from Sam joking that Jamie sees Claire as causing “his own demise” their relationship seems to be continuing to new strengths.

One thing that really peaked our interest was Diana saying that we never actually saw Faith die. Having only read a few pages into book 6, I have no knowledge of whether this was just her ‘messing’ with us, or if Faith could be alive, and will appear later. If Faith is alive and well it would certainly cast Mother Hildegarde in a new light. Did she swap Faith at birth, Omen-style? And could Master Raymond or Les Disciples be involved? 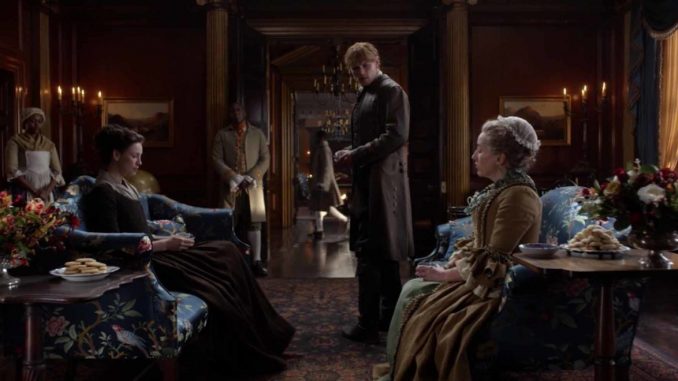 There may be trouble looming for set designer, Jon Gary Steele. It seems everyone has plans to steal everything from the River Run set. Perhaps his work is too good, but all five cast members expressed a fondness for the furniture, and a willingness to give it a new home. Hopefully this won’t happen. At least not until filming is done.

There isn’t too much to report beyond that. The panel were every bit as entertaining as we had hoped, showing off their New York accents, joking with each other and chatting with the audience. They all confessed to enjoying a drink or two and sound like they enjoy a good night out. And they all seemed to be looking forward to working on the continuing adventures of Claire, Jamie and friends. In short, all five stars did a great job. And they were aptly complemented by Ron, Maril and Diana.

One request for next time: If they could add Lauren Lyle, Cesar Domboy and John Bell, that would be even better!